Blockchain Notarization: How to certify documents and photos 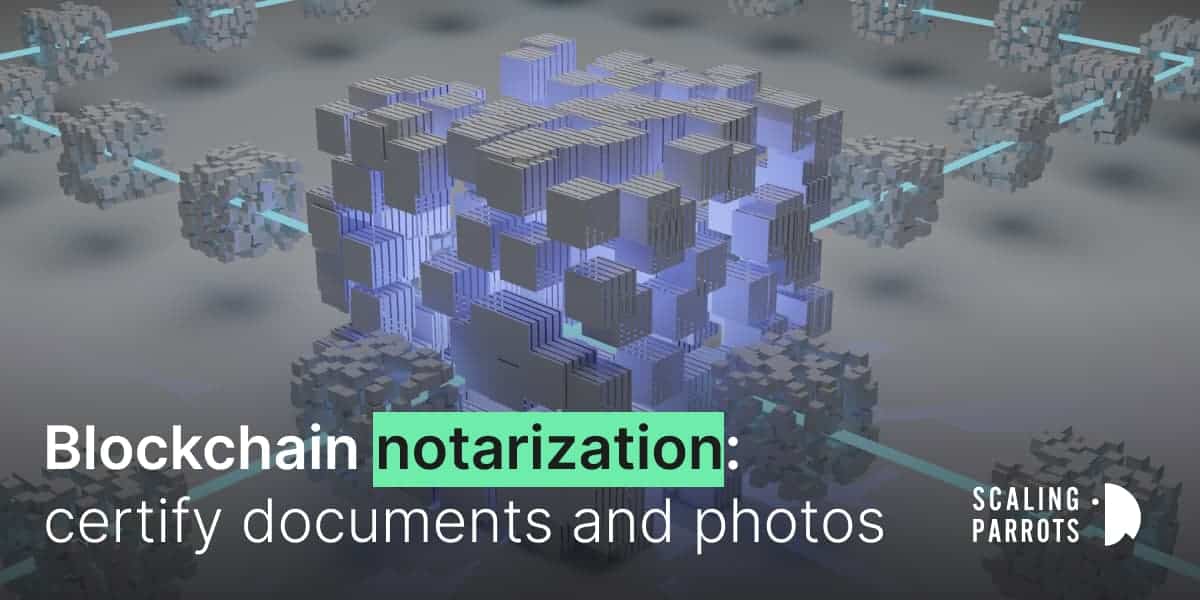 Notarization is by far one of the most popular applications of Blockchain now.

The reason for this can be attributed to the benefits of recording information on Blockchain immutably and its legal value.

But how and why is it important to certify documents and photos on the Blockchain?

In this article we at Scaling Parrots explain in detail everything you need to know about Blockchain notarization, giving you a concrete example which we have developed and brought to market.

What is Blockchain notarization

Assuming you already know what Blockchain is, let’s start with the definition of “notarization.”

Blockchain notarization is nothing more than immutable proof that at a certain date and time (the so-called “timestamp”), during events, a certain document has been certified. Since the document will be notarized, it cannot be changed in any way: its presence will remain immutable in the Blockchain in the form of an encrypted alphanumeric code that is called “hash.”

The hash code is unique to each document recorded on the Blockchain, rather like a tax code. It is exactly like a fingerprint: everyone has a unique and irreplicable fingerprint just as a notarized document has a unique hash code. The moment a single comma or a single pixel in the document is changed, the hash code will change.

Why is hash code used for Blockchain notarization?

The reason is related to the size of the document: the more data is recorded on Blockchain, the lower the performance of the Blockchain and the more expensive the costs of using it will be. For this reason, a strategic approach is to use as small amount of data as possible to gain the highest benefit from Blockchain notarization.

Blockchain notarization has several advantages. Below we list the two through which this technology has received wide acceptance in the business sector.

Immutability and transparency of information

As you well know, transferring any information onto Blockchain determines, clearly, that the data will remain on that chain forever in the form of a code of numbers and letters, associated with the time and date on which that action was completed. This operation is not modifiable in any way, even if I wanted to.

The traceability and immutability of the recorded information, creates the transparency that any other tool would not be able to provide.

Legal value of a recorded data

All right a piece of information on Blockchain is immutable, but what is its legal value?

Answering this question is Article 8-ter of Law No. 12/2019 (of the Italian law), called ” tecnologie basate su registri distribuiti e smart contract.” It defines Blockchain-based technologies and determines their legal effects for them.

This means that in the presence of a digital electronic signature, the document will be as integral and unchangeable as a document signed by a notary could be.

How to certify documents and photos with the Blockchain

For a particular document or photo to be notarized, it requires the presence of a digital ecosystem integrated with a Blockchain. Trivially, a Web3 site or app.

This would allow, by uploading the document or photo, notarization in a user-friendly manner.

At that point, the site would return a PDF document with the hash and timestamp information as tangible proof that the newly uploaded document has been notarized.

Clearly, to set up such an ecosystem, it is essential to have technical know-how from both a Web development and Blockchain development perspective.

We at Scaling Parrots, a software house in Brescia that specializes precisely in Blockchain, can provide support to any company to build an application that allows notarization of documents. To do so, simply book a one-hour free consultation, where we can understand the company’s needs and get the project on the right track from the start.

Does Blockchain notarization have legal value?

As explained above, under certain conditions, any document recorded on Blockchain is evidence with 100 % legal value. This means that one can formalize the registration of a document thanks to this technology.

Will Blockchain replace the figure of notary?

Among the most frequently asked questions: to what extent can the Blockchain affect the traditional professional world?

In the case of notarization, the work of a traditional notary overlaps perfectly with that of a Blockchain. It is therefore inevitable to think that the technology, in the not-so-distant future, may completely (or to a considerable extent) replace the work performed by a notary today.

Warning: by this we are in no way trying to condemn a valuable professional class. We are only exposing a trend that is growing strongly and is bound to grow increasingly.

We do not exclude that in the short and mid-term, Blockchain and notaries will coexist, creating a true partnership. However, in the long-term, decentralized technology protocols will replace all (or almost all) traditional professional figures, just like Uber is challenging qualified taxi drivers all over the world.

An example of Blockchain notarization: Certyclick

An example of a successful Blockchain notarization application we at Scaling Parrots developed for our client Vision s.r.l. We are talking about Certyclick, an app for smartphones that allows you to take photos and record videos by making them historical memory in the Blockchain.

To create this unique Italian app, we used the Algorand Blockchain, born from Silvio Micali, a computer science professor at MIT Computer Science and Artificial Intelligence Laboratory in Boston.

Algorand has the virtue of being an affordable and extremely high-performance protocol in terms of transactions per second, thanks to its Pure Proof-of-Stake validation algorithm based on Byzantine consensus.

Returning to Certyclick, thanks to this Android and IOS app it is possible to notarize photo and video assets, which are immutably certified. As detailed earlier, the information recorded on Blockchain is alphanumeric text that corresponds to the “fingerprint” of the uploaded photo or video.

But why certify a photo on Blockchain?

But why notarize a photo? What is its benefit?

Let’s try to answer this question by giving a concrete example, because we at Scaling Parrots believe that using real, concrete examples from everyday life is the proper approach to explain Blockchain. Nobody likes technicisms, we are fully aware of that.

Suppose you have an apartment to rent. It is an apartment with fine materials, and you care especially that these are not ruined by the tenants you rent it to. At the end of your tenancy, you find deep scratches on the parquet floor. However, the tenant claims that the scratches were already there before he occupied the apartment.

In this case, a simple video recorded from the phone would not have constituted certain and reliable evidence: anyone can alter the information contained in the phone, whether it is the date or the video (which can be altered with video editing tools). By certifying the video on a Blockchain (with Certyclick, in this case) before the tenant sets foot in the apartment, you would have protected yourself from the possible occurrence of such an incident. And in this case the Blockchain notarization would be undeniable proof that you are right about the occurrence of the facts.

In this article we have introduced you to Blockchain notarization and how to implement it in support of a business.

If you are looking for a software house specializing in Blockchain to build your notarization application, Scaling Parrots is at your disposal. You can book a one-hour no-obligation knowledge consultation and we will be happy to listen to what you want to tell us and help you through the implementation of your idea.

Our goal is to become the number one Blockchain company in Europe and we will continue to work day after day to achieve this goal, thanks also to your support.