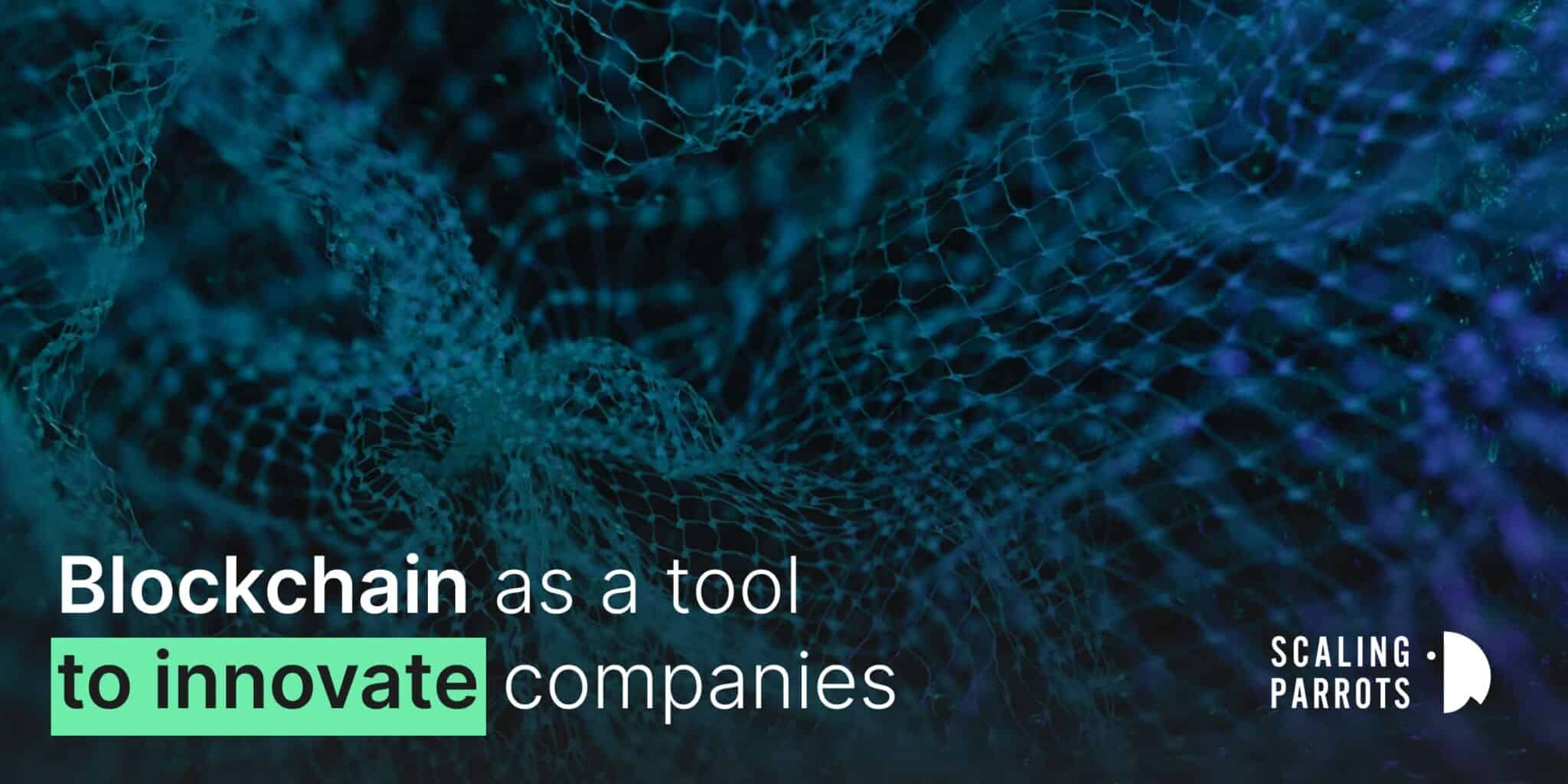 Blockchain: for many companies, a subject still unknown, for others a tool to renew and scale their business.

It is enough to do a quick Google research to see how poorly this technology is still known. The definition is simple enough: a shared, immutable digital ledger.

Due to fuzzy terminologies, trying to learn more about this technology is a tough. What is Blockchain capable of doing for a company? What is the added value it can bring to a business?

In this article we want to answer these questions, introducing you concretely and simply to 5 examples of Blockchain implementations in business contexts that are already active and working.

The examples you are about to read are only a small part of what are the huge possibilities of this technology: you will realize that there is no limit to the range of opportunities and scalability.

Before we start, however, as a company specialized in Blockchain, we at Scaling Parrots would like to explain you why any business cannot turn its head away from the digital revolution.

Why a company should invest in blockchain

Anyone can benefit from Blockchain. It seems like ages ago, but the first real application brought benefit to the B2C sphere only in 2009, with Bitcoin. Since then, the technology has incredibly evolved and the opportunities for implementations in the business sector have soared.

The interest has grown as well: in the decade from 2012 to 2022, excluding physiological peaks due to market volatility, searches for the keyword “Blockchain” is on an upward trend and shows no signs of slowing down.

The reasons why Blockchain is growing adoption year by year are a lot simpler than you might think. Blockchain:

Already so many companies from different sectors have begun to invest in this technology. Amazon, Intel, Alibaba are just a few names of industry giants who have seen it as an innovation tool they do not want to miss.

Now that you understand the benefits of “blockchain,” it is time to see Blockchain applications that enable companies to scale their business.

1. Attribution of copyrights in the music industry

Even before the term “blockchain” was on everyone’s lips, Spotify was familiar with it as early as 2017, to the point of buying Mediachain, a startup specializing in the sector.

During those very years, the music streaming giant faced multimillion-dollar fines for not paying royalties to the authors of tracks being played on the platform. In its defense, the Swedish company claimed that it did not have a database of artists to allow monetary percentages to be distributed to those who were entitled to them.

As a recurring problem in the music world, Spotify decided to invest in a decentralized Blockchain system, incorporating Mediachain into its corporate workforce in 2017 and putting an end to this long-standing problem.

2. Supply chain in the pharmaceutical industry

An interesting example of Blockchain application comes from overseas, more specifically from the United States (a nation that to date has more awareness of the technology and its possibilities).

The Food and Drug Administration Program is a U.S. government program that has invested in Blockchain to support drug producers in tracking and distributing medicines on U.S. territory. Thanks to it, it is possible to easily manage the drug supply chain, preventing, for example, the distribution of fake or inefficient drugs.

Healthcare is by far one of the sectors most in need of innovation in this regard, due to an outdated system that is hardly ever updated with the new features that the technological world has to offer.

3. Registration of contracts in the real estate sector

Real Estate is still a largely “analog” industry, at least the Italian market. In Canada, the company UBITQUITY has created an ecosystem that allows notarization of real estate contracts through tokenization of them. A property can then be “recorded” through an NFT that defines its features and ownership.

In addition to the simple registration of real estate contracts offered by Ubitquity, Blockchain in Real Estate offers the enormous potential of property partitioning. This can allow, for example, the sale of a part of a property to a potential buyer, opening the door to small investors in a market that is by its nature economically inaccessible and extremely illiquid.

4. Transparency in traceability and reliability of raw materials

Raw materials are a key part of our economy. If we talk specifically about luxury raw materials, more attention is needed on them from all parties involved in the production and sales chain. To this day, for example, from the extraction in the mine to the retail sale, the value chain is governed only by a relationship of trust between all touchpoints. This is an incredible risk, because the whole ecosystem can lead to untrue data, with all that follows (corruption and speculation in the first place).

To solve this problem, De Beers, the number one diamond manufacturing company in the world, has created Tracr, a Blockchain that ensures reliability throughout the entire diamond creation process, from the moment it is mined to the moment it is sold by the jeweler. Thanks to the traceability provided by the Blockchain timestamp, the authenticity and origin of the diamond can be guaranteed.

As you may have guessed, among the most popular Blockchain applications today is precisely supply chain management.

Another sector in serious need of transparency is Nonprofit Organizations. People who donate to charitable corporations want to know how and where the money donated is used. This problem causes people to rely on the largest and most trustworthy entities, precluding small NPOs from getting the livelihood they need.

BitGive is a company that has used the Blockchain to address this gap in the market, supplying the technology to offer tracking of donations and to clarify in which projects the money received is distributed. The Water Project and Save The Children are two associations that already benefit from this technology.

If you represent a company, after reading these 5 Blockchain applications you must have realized that investing in this technology will turn out to be a choice that may brings you considerable benefits already in the mid-term. The profit on the Blockchain investment is related not only to the efficiency of processes (and therefore to a better quality of work), but also to the saving of economic resources in terms of technology (the most efficient Blockchains, besides being fast in terms of transactions per second, are also very cheap) and workforce (many manual processes are automatized).

Anything that can be conceived as a supply chain, Blockchain can greatly improve its efficiency, whether it is people, numbers, data or money.

How the current market “shares” the Blockchain

The current global Blockchain market sees the financial sector unchallenged with 38% of Blockchain applications implemented right on it. The reason is obvious: Decentralized Finance (or DeFi) was the first to find fertile ground due to the security and efficiency of transactions. As research by Gran View Research shows, in a $5.92 billion market (as of 2021) the podium is shared by financial services, healthcare, and transportation and logistics.

As you can see, the “pie graph” is incredibly unbalanced to date. In the coming years, new sectors will enter the Blockchain market, and those that already make conspicuous use of it (see healthcare) will consolidate their slice of the pie even more.

Then again, we are talking about a market that is currently in an embryonic state compared to what is to come in a timeframe of at least 10 years.

In this article we have shown you 5 examples of real-world Blockchain applications. The potential of this technology is endless and the room for optimization and scalability for enterprises is huge, even more in a market which is in its embryonic state as it is today.

We at Scaling Parrots have been doing just that since 2018. With knowledge and experience gained in the field, we now support the technological growth of dozens of companies through Blockchain. Ours is a long-term vision: we are aware of the impacts that this Web3 industrial revolution will have in the next 10 years.

Blockchain is here to stay. And so are we.

If you think we can be of any help to you, you can book a free one-hour consultation with us. We will be happy to listen and support you in the development of your business.