Blockchain gaming: what is Play-To-Earn and how it works (+2 examples) 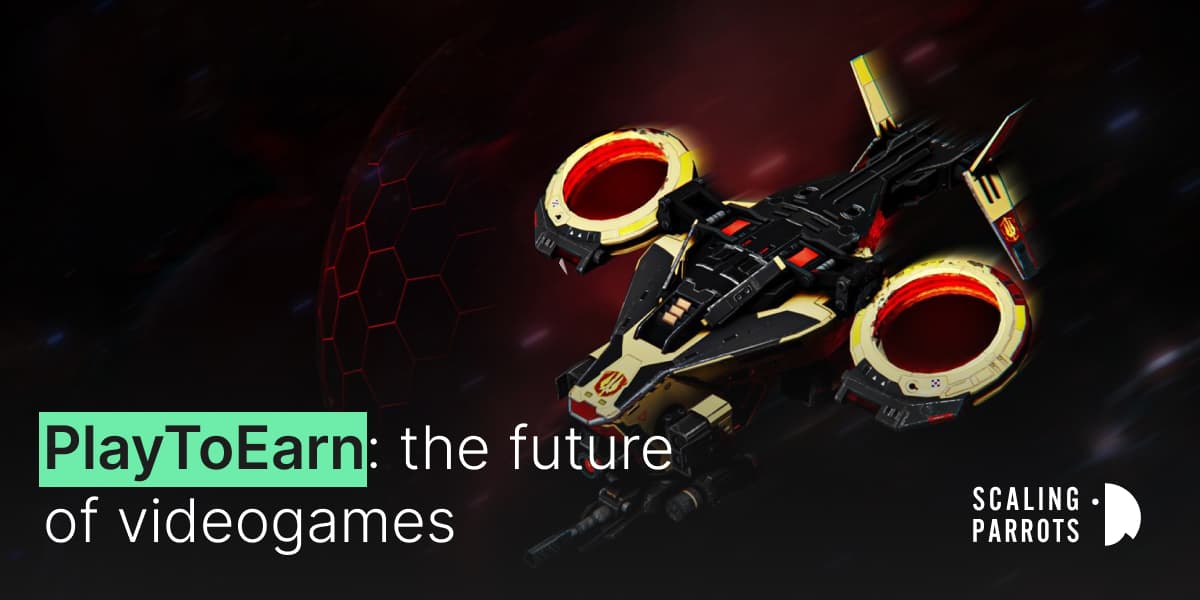 Blockchain is not only finding breeding ground in the corporate sector. By now we are all familiar with Bitcoin, the queen of cryptocurrencies created in 2009 by Satoshi Nakamoto. Bitcoin is the most striking example of how Blockchain can serve a person. If you think that the crypto world is the only context for the application of Blockchain in people’s lives, however, you are way off. For the past few years, in fact, there has been a new trend that has been powerfully entering the market that uses this very technology to work.

We are talking about the Play-To-Earn: The Web3 gaming industry.In this article we want to explain what Blockchain gaming Play-To-Earn is and how in Scaling Parrots we managed to create our own Blockchain-based video game.

The current state of video games

We are far away from 1978, when Space Invaders boomed among arcades, marking the beginning of a movement that is now a true mass phenomenon. In just over 40 years, gaming has expanded like wildfire, reaching a business of 2 billion 243 million euros in 2021, up +2.9% from 2020.

The year-on-year growth of this industry has become almost predictable, even more since video games have begun to base their revenue models on in-game purchases. Just to give one example, Fortnite, a globally successful Battle Royale video game among the younger generation, grosses more than €3,000 every minute thanks to the sale of skins and weapons.

The problem with “traditional” video games

However, there is a fundamental problem: Fortnite, as well as all video games with an internal marketplace, allows you to buy game add-ons, but in a “closed” system (that of the video game, to be exact). What you purchase internally stays there. Added to this factor is the fact that any product bought on video game with in-game purchases is not yours for all intents and purposes. Or rather, it is associated with your account, but you do not hold the rights to it: if the game were to shut down, you would lose all the purchases you have made, with no right to reclaim ownership.

Simply put, these types of purchases are not assets: their economic value is lost the moment you buy them.

Play-To-Earn, relying on Blockchain, solves this problem. If you are already familiar with the concept of tokens, you will know that every token in your possession is a real asset that can be used, exchanged and sold forever. This is precisely the concept that differentiates a “traditional” game from a Play-To-Earn game.

Blockchain gaming: what is Play-To-Earn and how it works

Let’s start with the definition: the Play-To-Earn, is a Blockchain-based video game. The tokenization of any game element (whether it is a character, an object or a specific feature) allows the creation of real assets, each of which will have a real economic value. Each asset (which is in fact an NFT) can then be bought, traded or sold for the value imposed by the market, based on shortage, utility and supply/demand.

To simplify it, we will try to explain the concept to you with an example.

Suppose there is a video game in which you can build your own city, with the purchase of plots of land and buildings. In this game, each plot of land and each building will be a real NFT. The moment you buy one of these NFTs, you will become its full owner. At this point, your wallet will contain your NFT, which is unique and immutable: you will be free to keep it, use it for the purposes of the game or sell it in a dedicated marketplace, as if you were selling something on eBay (and this is also where the concept of interoperability made possible by the Blockchain comes into play).

Now you may ask: based on what value do I buy or sell a game NFT? Quite simple: based on the rules of the free market. If, for example, you own a highly coveted plot of land in this fantasy game, given its uniqueness and high market demand, you will be able to sell your NFT at a satisfactory price.

For this reason, the Play-To-Earn world opens its doors not only to gamers, but also to collectors and investors.

Of course, at the base of every successful Play-To-Earn is a well-thought-out and engaging game logic. In short, there is real utility: the game itself. No one would ever dream of playing a boring, incomprehensible video game with an almost nonexistent community. Without solid fundamentals, the game will not succeed, and the related market will go along with it.

Let us now analyze an extraordinarily successful example, trying to understand what are the principles that have made it one of the key points of the Play-To-Earn industry.

An example of a huge successful Play-To-Earn: Sorare

Sorare is a French startup creator of one of the hottest Play-To-Earn games of the moment, which takes its own name. A startup so to speak, since it raised a $680 million funding in September 2021 to further develop the game.

It is a football game on Blockchain Ethereum similar to fantasy football: you build your own team which will have to compete in different leagues, each of which will have a financial jackpot. Each NFT standing for a real footballer is for sale either through auction or in the platform’s secondary market: purchases and sales are the company’s entire revenue model to date.

Sorare is now a planetary success, but what have been the key factors behind this incredible growth?

Today Sorare is attracting the attentions of major and minor investors alike, as well as gamers and influencers around the world.

Planet Wars, the Play-To-Earn by Scaling Parrots as a pioneer of Italian Blockchain gaming

We at Scaling Parrots are a software house with the goal of modernizing businesses through the implementation of Blockchain. But we also like to widen our perspectives. That’s why in 2021 we launched our Play-To-Earn game, Planet Wars.

Everyone likes space wars, especially us. This is the reason we chose space as the setting for our game.

Planet Wars is a game that blends strategy and collecting: it is set in a universe with 1123 NFT planets, based on Binance Smart Chain and NFT On-Chain.

The planets have these characteristics:

In addition to planets, there are three resources in the game (gold, iron, and hydrogen) that will be used to buy game elements that are essential for dealing with the game’s space battles.

If we want to make a comparison, Planet Wars incorporates game logic similar to Age Of Empires (which nostalgic gamers will remember with pleasure): owning planets, resources, and spacecraft will allow you to prevail over your opponent just as owning a well-fortified city and a powerful army served you to win on the very famous Age Of Empires.

With Planet Wars we wanted to balance gaming and collecting, going to embrace both gamer users and NFT collectors.

The game’s roadmap aims to improve the game monthly in the long term. Our goal is for Planet Wars to become the benchmark Italian space Play-To-Earn game in the world.

Criteria for investing in a successful Play-To-Earn

As with any NFT collection, there are key points to rely on when choosing to invest time and money in a Play-To-Earn.

Let’s have a look, trying to analyze them one by one, choosing as a reference the very game we developed:

In the sector of video games, we create and the live services we offer, collectible digital contents will play a significant role in our future.

In conclusion, is Blockchain gaming the future?

We hope through this article to have been helpful to your understanding of what a Play-To-Earn game is and how it works by illustrating a remarkably successful game and our own game with great ambitions, Planet Wars.

The path to mass adoption of Blockchain gaming is still a long way off, but the conditions for the success of Play-To-Earn games on Web3 are solid and justified. As with all things, it takes foresight and hard work, features that we at Scaling Parrots have in our DNA.

If you are interested to learn how to develop a Play-To-Earn video game or would like to learn more about Blockchain, you can book a one-hour free consultation now. We will be happy to help you.