Blockchain for the insurance industry: how it works (+4 benefits) 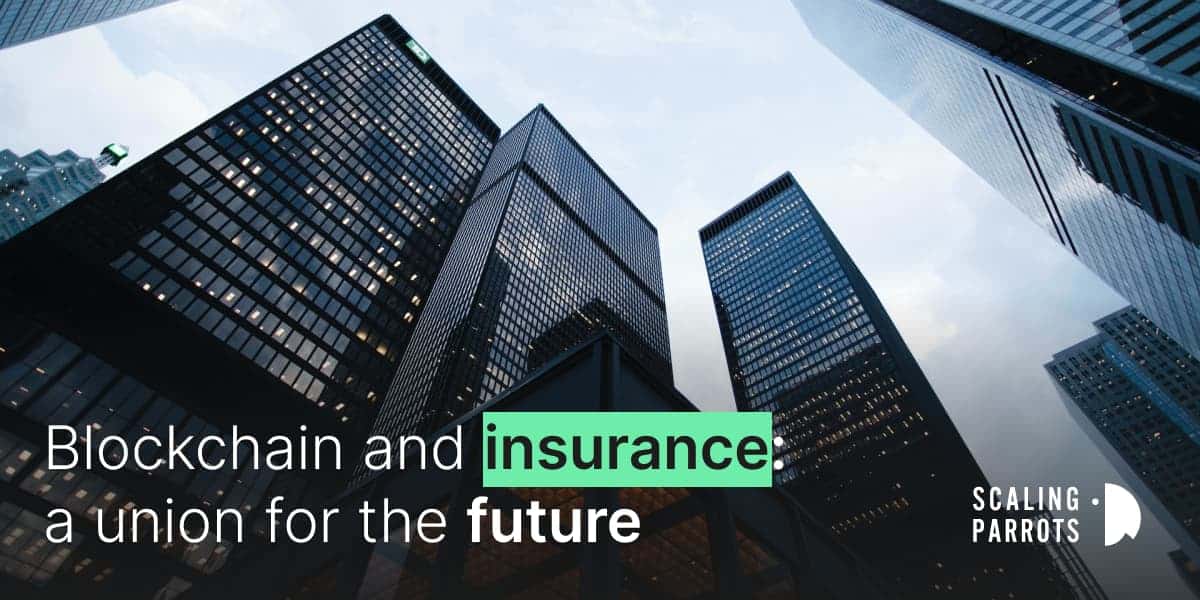 Blockchain for the insurance industry: how can a revolutionary technology transform an already remarkably strong market?

In this article, we will explain how the Web 3.0 reference technology can make a huge contribution to the insurance world, saving time and money without affecting business processes and structures (but rather optimizing and improving them).

The world of insurance in recent years has undergone an incredible transformation. Insurance is a product that has existed for many centuries but (unfortunately) has been sold and distributed analogically for a re long time (without the support of digital). Only in the last decade, with the boom of online sales, has something begun to move, thanks to the advent of the so-called insurtech companies (which is a contraction of the words insurance and technology). What is surprising is that even though the insurance industry moves dizzying economic numbers every day, it is still nowhere near a saturation point, whether we are talking about technological development or pure economic profit.

Along with this growth, a technology has developed since 2009 that is considered among the most revolutionary of the modern era: the Blockchain. We at Scaling Parrots know this well: we are a Blockchain software house that has been developing this technology since 2018 to serve companies in every sector, including the insurance industry. We have the expertise, and just as much historical knowledge.

But can the growth of the insurance industry (which has yet to reach its peak) mix with Blockchain technology? And if so, how? The answer is nicely explained in this article. So read on.

First let’s start with the most emblematic statistics that characterize the expansion of these sectors.

The growth of Blockchain and the insurance industry

The growth of blockchain technology is no longer a surprise. There are already numerous studies on how the Blockchain will be implemented by companies.

We offer just a couple of data, taken from the most important Blockchain trends of the next 10 years:

As you might have guessed, the expansion of the technology sector is looking big, and companies are aware of it, although they have not yet gone “all in.”

What, on the other hand, are the data about the insurance sector? Let’s have a look:

The insurance industry, therefore, will undergo exponential growth compared to the current situation, and it is not hard to imagine that this growth could find a valuable ally in Blockchain.

However, even though the market does not seem to be showing the slightest signs of subsiding, it has some shortcomings that still pose huge efficiency problems. In the next section we explain the 2 main problems.

The 2 recurring problems in insurance companies

To understand how to improve the insurance industry through Blockchain, it is important to start with the problems it brings.

Can Blockchain really improve these two aspects of the insurance industry? The answer seems almost obvious: yes. We explain how in the next section.

Blockchain for the insurance industry: 4 benefits to improve the business

How can the Blockchain optimize insurance services?

The first huge benefit is the one given by smart contract. To understand it well, it is necessary to take a step back, and explore the definition of “smart contract” in further detail. We will try to be as clear as possible, which is what we at Scaling Parrots like to do.

Definition: A smart contract is a clause found within a Blockchain. To reduce it to even simpler terms, it is nothing more than computer code according to which upon the triggering of one event another event occurs. The famous “If” (condition) “Then” (instruction) of the computer world, to be clear.

How can a smart contract serve an insurance company? Let’s take a concrete example.

Luigi has booked a trip to Portugal and decides to insure himself against air travel cancellation. The probability of a strike by his airline is high, and ironically his flight suffers a cancellation, not allowing him to fly and arrive at his destination.

At this point, Luigi (as the insured) must obtain a refund for the ticket. The traditional process would involve opening a claim with the insurance company, which, after checking the flight cancellation, will settle its client’s claim.

This implies the intervention of a persona: a claims officer.

But what would happen if the support of a smart contract on Blockchain was used?

By registering a smart contract in such a way that upon cancellation (“If”) of the flight, the customer would automatically be refunded their ticket (“Then”), the policy company:

Clearly, the Blockchain is only a technological tool that can track information, and as such it cannot know whether an event happened. Therefore, for the smart contract to receive the flight cancellation information, the support of an oracle is needed. What is this?

Definition: A Blockchain oracle is a third-party service that provides information external to a smart contract. It acts as a connecting bridge between the Blockchain and the external world. Blockchains and smart contracts cannot access off-chain data (data that is outside the network). However, for many contractual agreements (such as an insurance policy), it is vital to have relevant information from the external world to execute the agreement. Source: Binance Academy.

At this point, the journey becomes clearer:

As we explained earlier, fraud is a severe problem for the entire insurance industry. The Blockchain, as an immutable distributed ledger, prevents the chance of fraud.

Indeed, thanks to it, every piece of information related to an insurance policy (from the identity of the policy holder to the accuracy of a claim) is tracked and verifiable. Of course, even in this case the Blockchain is not the depository of truth, as a certain level of process efficiency is needed at the basis of any implementation of the technology.

To make the concept even clearer for you, let’s try to see what information can potentially be recorded on Blockchain:

Such a wide amount of information, if managed wisely, would allow all insurance-related information to be tracked transparently and would reduce an annual loss of about 13 billion euros.

3. Tracking of production activities with timestamping

Sticking with the topic of traceability: managing big data has now become a crucial activity in any business. Knowing how to collect and interpret data is an asset for optimizing business processes.

Take for example a critical branch of the insurance industry: customer care. Call centers receive dozens of calls every second from customers (or potential customers) seeking all kinds of information. It may sound strange, but most insurance companies (including big ones) have not yet reached a level of digital transformation that perfects the work of the customer center.

Most calls are not tracked, and if done, it is not done systematically. In short, it is a missed opportunity to better understand people’s needs and optimize one’s offerings and workforce management.

How can Blockchain help in this? It is quite simple: it can automate the collection of information through timestamps.

The “timestamp” is a time stamp that records information on Blockchain immutably. The date, time and place will remain imprinted on the digital ledger forever.

Suppose that each insurance worker, once he has finished a call with a customer, enters information about the call itself into his work dashboard: reason for the call, customer ID, and so on. If the working CRM sent all this information to a Blockchain, it could be collected systematically, allowing data analysis and efficient customer care team processes to take place.

What’s more, the potential could be even greater, making the system even better and making the work of employees much easier.

This could be possible through the implementation of a voice detection system, which, thanks to an algorithm capable of finding specifically set keywords (during the project phase), could understand the information and send it to the Blockchain in total autonomy. Thus, in this case, the human contribution of the post-call operator would be superfluous, enabling not only the collection of data but also reducing the operational time of each call.

The timestamping process (which we at Scaling Parrots have developed and commercialized under the name Flux+) is an efficient technological solution for any company that aims to track information automatically and without human intervention.

Last, but not least, is the benefit that Blockchain brings monetarily. Not only saving money and time, but also increasing revenue.

This is due to the new business opportunities that the technology can offer. Indeed, thanks to smart contracts and oracles, it is possible to have greater control over events. The consequence is the chance of introducing new types of policies into the market: micro-insurance. What was previously not insurable, thanks to Blockchain becomes insurable, guaranteeing immediate liquidations in case of a claim.

Micro-insurance is certainly the most futuristic scenario of the four, but it has already found a highly profitable market in America, thanks to the emergence of specialized companies (most notably Lemonade).

How to implement Blockchain to the insurance industry

Let’s be clear: developing Blockchain for the insurance industry is no easy task. Above all, it is important for companies to realize that Blockchain is not the solution to everything, as our CEO Alessandro Ricci says.

“Blockchain is not a god and does not work miracles. Most importantly, it doesn’t recognize true from false. When I use the Blockchain to certify, I am not necessarily certifying the true. Rather, it is very likely that I am going to certify the true the moment I apply the Blockchain as far upstream as possible.”

Based on this assumption, to apply this technology, it is essential to have in-depth and long-standing knowledge, even though the technology itself is not that old (it was born in 2009).

At Scaling Parrots, we are a software house that offers strategic consulting and Blockchain development in the insurance industry, as well as in so many other sectors. Our team is not only able to develop the Blockchain within your company, but more importantly, they are able to give ongoing support on its implementation, helping you understand what is and what is not worth doing.

You can book a free one-hour no-obligation consultation: we will be happy to hear your ideas and start (if there are the right conditions) a long-term collaboration.

How to calculate the ROI of Blockchain in insurance

We have almost reached the conclusion, but it is only fair to talk about one last important aspect on the topic of “Blockchain for the insurance industry.” This aspect concerns the profit on investment of such a technology. By investing in Blockchain, how can an insurance company calculate the so-called “ROI”?

The answer is mainly related to two factors, which are related to the benefits explained a few paragraphs ago:

Keeping in mind that tangible benefits are always achieved over the long term, if you are an entrepreneur or manager, it is important to start with these fundamentals as metrics to assess if it’s worth it.

Blockchain for the insurance industry: Conclusion

The implementation of Blockchain in the insurance industry, as you may have guessed from reading this article, is an opportunity that is impossible to ignore. This technology is not only the trend of the moment, but it is a real tool to scale businesses.

If you want to learn more, contact our software house: we will guide you step by step in the strategic choices of implementing Blockchain within your company or, if necessary, to understand it in further detail.